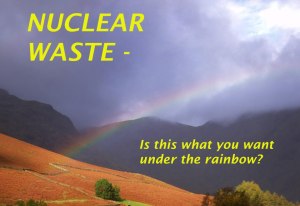 Radiation Free Lakeland will be at Ambleside centre on Sunday afternoon from 12.30 demonstrating against the government’s push to bury hot radioactive waste under Cumbria’s leaky geology.

We will be asking people to sign a letter to Ed Davey, Secretary of State in charge of the diabolic plan

To the Department of Energy and Climate Change

Cumbrians have said No repeatedly to a geological dump under this land from Morecambe Bay to the Solway. The new consultation announced by DECC is a narrowly focused set of questions with the aim of achieving a Yes response to a ‘geological disposal facility’ as quickly as possible by scrapping the rights of host communities to say NO. The consultation aims to give the few people on the Allerdale and Copeland Borough Council Executive the sole right to make the decision. Cumbrians have already said no repeatedly to becoming the nuclear dumping ground for existing and future radioactive wastes taken out of reactor cores and buried under Cumbria’s leaky geology.

I am not a willing volunteer for the geological dumping of nuclear waste in Cumbria and my representative County council has already said NO.

The new CONsultation can be seen here: https://www.gov.uk/government/uploads/system/uploads/attachment_data/file/239237/Consultation_Review_of_the_siting_process_for_a_GDF_FINAL.pdf

Radiation Free Lakeland are not responding directly to this sham CONsultation which blatantly shoves aside any semblance of local democracy and even says that that any challenges from non government experts contrary to the geological disposal agenda will merely be used for “more effective policy and delivery” of geological dumping (pg 34 2.82).

We are urging all groups, all local councils, parish and district and county to strongly oppose this new route to geological dumping under Cumbria.

Please write opposing the sham and the geological dumping agenda – the more people who write and ACTIVELY oppose this the more chance Cumbrians have of continuing their lives and livelihoods in Cumbria.

2 thoughts on “AMBLESIDE ON SUNDAY – DEMO”