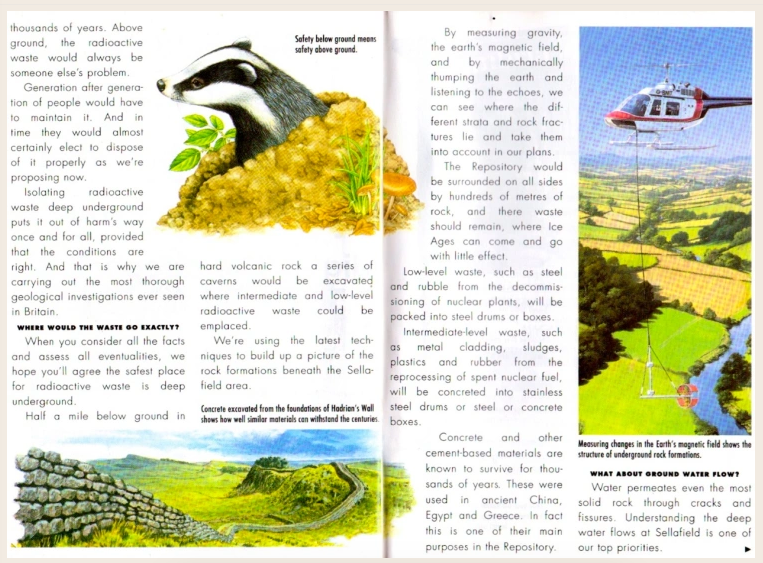 The following images are from a four page Advertorial by NIREX in Cumbria Life from 1993 (NIREX was the then government body on “Nuclear Waste Disposal.” ) The NIREX plan was for “deep disposal” of intermediate and some low level nuclear wastes. Now in 2021 the “vision” is to put the intermediate level nuclear wastes (previously earmarked for the NIREX dump at Longlands Farm, Gosforth) into Not So Deep Silos’ at the Low Level Waste Repository at Drigg and the even higher activity and very hot nuclear wastes (which even the gung ho NIREX never proposed putting deep underground) into a Geological Disposal Facility ( deep under the Irish Sea is in the frame).

Note that the NIREX advert from 1993 states that the Geological Disposal Facility plan is for “intermediate and some low level wastes.” In a newsletter in March this year for the Low Level Waste Repository at Drigg, it was said: “The NDA is exploring the benefits of developing Near Surface (NSD) – for disposing of a proportion of Intermediate Level Waste (ILW), but no decision has been taken on whether UK Government will pursue this option or whether LLWR, will in time, host a NSD facility.”

We asked a number of Freedom of Informations questions which have not been answered directly or honestly with a simple yes or no but serve to deflect and frustrate any scrutiny.

The honest answer would be NO

The honest answer would be NO

The honest answer would be: the major components of Intermediate Level Wastes are nuclear reactor components, graphite from reactor cores and sludges from the treatment of radioactive liquid effluents. All of these wastes were previously designated by NIREX for a Geological Disposal Facility.