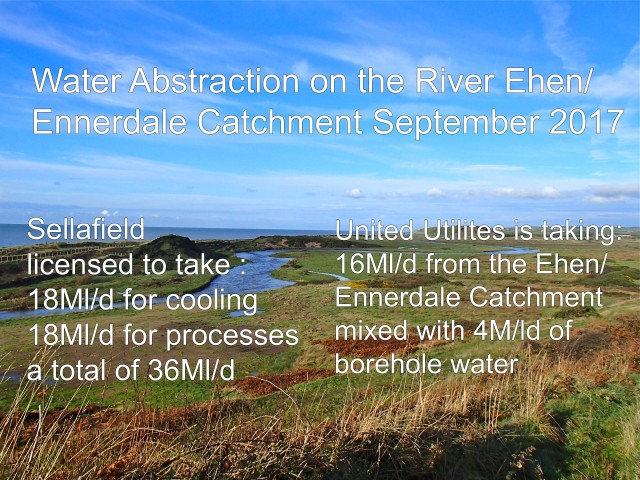 Many thanks to Scisco Media for publishing the “Troubled Waters” article.  There is an update to the article as we now have answers to a Freedom of Information request from the Nuclear Decommissioning Authority who have replied that they will not be stopping their abstraction of 36 mega litres a day from the river Ehen and that there has been NO research done on the impact on for example fresh water pearl mussels from this abstraction from the Ennerdale/Ehen catchment area .  They also say they are not using borehole water as compensation flow  into the Ehen (although they have in the past according to old documents as without compensation flow there is ‘drawdown” effect ).

So there you have it.  One rule for the nuclear industry who take 36Ml/d from the river Ehen and another for West Cumbrians whose domestic use from the Ennerdale/Ehen catchment “is now approx. 4Ml/d of borehole water (20%), mixed with approximately 16Ml/d of Ennerdale Water (80%)”.

“the domestic supply of fresh water from Ennerdale to West Cumbrians is to cease by 2022. This is (so the official narrative goes) to safeguard water levels on the River Ehen flowing from Ennerdale Water that provides a “delicate habitat” for one of the last populations of endangered fresh water pearl mussels.

The pearl mussels are truly remarkable and very long-lived creatures and saving them is undeniably the right thing to do. However, the huge expense of a £300m pipeline from Thirlmere to West Cumbria “to protect the pearl mussels” has been criticised by water bill payers in the Lake District. The enormous sums of money and effort to save the pearl mussels are meaningless while the integrity of the River Ehen is being trashed by the nuclear industry. The volumes of fresh water abstraction from the River Ehen by the Nuclear Decommissioning Authority for Sellafield’s cooling and processing is staggering (remember they take four million gallons daily from Wastwater as well as other sources too).

The nuclear industry is understandably coy about its water usage from the River Ehen but they have been unwittingly rumbled by the National Grid. The National Grid in its documentation on the plan to provide pylons to and from the proposed new nuclear reactors (adjacent to the River Ehen) have published Sellafield’s unmentionable fresh water abstraction rates.

They are truly mind-blowing. 36 mega litres daily. That is eight million gallons every single day i.e. twice as much as is abstracted from Wastwater. To appease the Environment Agency, the nuclear industry abstracts borehole water which it then puts into the River Ehen as “compensation flow”.

The Thirlmere pipeline won’t be in place until 2022 (to coincide with construction of the proposed diabolic new nuclear reactors ?) United Utilities have however been keen to start using less water from Ennerdale and have started using borehole water “in the mix” for West Cumbrians to drink.

This mix has caused reported illnesses, including hair loss, skin rashes and stomach upsets all of which have been documented on a facebook group ‘West Cumbria Water Supply – Save our Water Services’ of over 6000 people.

Following  complaints, UU have “considerably reduced the percentage of borehole water” which “is now approx. 4Ml/d of borehole water (20%), mixed with approximately 16Ml/d of Ennerdale Water (80%)”.

Given that the industry is taking so much water from the River Ehen and is lining-up its ducks to build unnecessary new reactors on the floodplain of the river, it is hardly surprising that people are suspicious. People are beginning to suspect that they are not the top priority for good quality fresh water in Cumbria.

Is the Thirlmere pipeline and the stopping of domestic water use from Ennerdale to benefit the freshwater mussels?  It could only be argued that this was the case if the Moorside plan was scrapped and Sellafield stopped accepting nuclear waste for reprocessing.

There is a desperate need for an independent public inquiry into the nuclear industry’s ongoing excessive fresh water use and the priority it is given over and above the public’s needs.  The fresh water pearl mussels are in the same boat as the rest of us: on troubled Lakeland waters.”