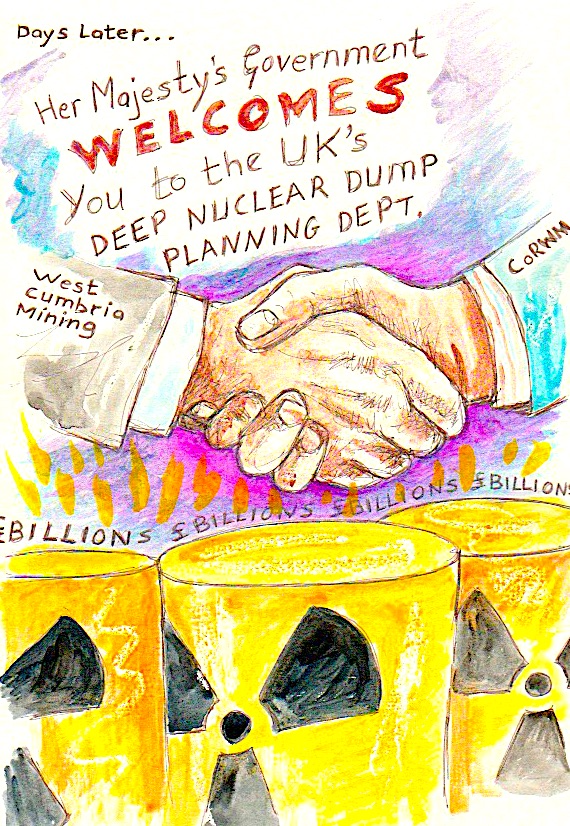 Two controversial developments about to disastrously impact the Irish Sea are due to be decided upon any day by Government.

Mainstream press and information coming from mainstream NGOs have been silent as to why these two issues are connected via crony capitalism.

Crony capitalism, an economic system in which commercial enterprises thrive not as a result of free enterprise, but rather as a return on money amassed through collusion between a business class and the political class.

There is no better example of this than the appointment of the CEO of West Cumbria Mining, Mark Kirkbride to the Committee on Radioactive Waste Management.

It is outrageous that CoRWM appointed an advisor in 2019 with commercial interests in the same area of the Irish Sea as is being actively considered as a Geological Disposal Facility for heat generating nuclear wastes.

This area of the Irish Sea includes Marine Conservation Zones and other protections.

Mark Kirkbride has recently provided costings to Government for the Delivery of a GDF (Nuclear Dump) including advice on enormous Tunnel Boring Machines from the same company (Herrenknecht) which would supply his coal mine.  This is a direct conflict of interest.

Mark Kirkbride’s role at CoRWM to advise on “methods of investigation” means that he has clearly advised on the seismic blasting due to take place in July/August in the Irish Sea to “investigate” the complex geology for a deep nuclear dump.

The enormous area of the Irish Sea in which the hugely damaging seismic testing would take place is adjacent to and overlapping Kirkbride’s proposed coal mine.  A recent Freedom of Information question by a Drigg resident reveals that the information garnered  from the seismic survey would be used by commercial interests such as West Cumbria Mining.

We ask that you and your colleagues in Parliament who cherish due democratic process make representation asking that Mark KIrkbride’s appointment to CoRWM is terminated before any decision is made on the Coal Mine by the Secretary of State.

It is clear that the Government cannot take an objective decision on the Cumbrian coal mine while the CEO of said coal mine is employed by Government as an “invaluable” advisor to Delivery of a Geological Disposal Facility (Nuclear Dump).

That advice has included seismic testing of the Irish Sea due to start any day.  Over 45,000 people have signed a petition urging a halt to the seismic survey which has circumvented the normal regulatory process by calling itself “scientific research” when it is a commercial venture by a limited company, Radioactive Waste Management for which the CEO of the Cumbria Coal Mine, Mark Kirbride is “invaluable” advisor.  The seismic survey would irreparably damage our “protected” marine life in the Irish Sea.

The Cumbrian Coal Mine and the Nuclear Dump Plan of which the seismic survey would be the first damaging salvo are hand in crony hand while Mark Kirkbride remains as Advisor to Government.

This is the dark heart of Capitalist Cronyism and it must stop.

Any approval of the coal mine and the seismic survey to facilitate a subsea nuclear dump would be morally and most probably legally indefensible while the CEO of West Cumbria Mining is “invaluable” advisor to the Committee on Radioactive Waste Management.

“Agenda Item 6. Questions from the public

40.Terry Bennett asked why CoRWM has not announced a declaration of interest for Mark Kirkbride, Chair of CoRWM Subgroup 2 and CEO of West Cumbria Mining (Holdings) Ltd. Marianne Birkby also asked why a declaration of interest for Mark Kirkbride was not announced, and whether boreholes drilled by West Cumbria Mining Ltd would be used to facilitate a GDF. NT replied: “There would only be a conflict of interest if there was a link between the Cumbria mine and a possible GDF. There is none – CoRWM’s remit is radioactive waste not coal – which is why there is no declaration of any conflict. Mark was appointed in 2019 because of his extensive knowledge of underground construction, knowledge which has already proved invaluable. The fact is that there is genuine disagreement on this issue. We cannot take it any farther, therefore.”

Both Prof Terry Bennett and Marianne Birkby have since been excluded from subsequent CoRWM “Open” meeetings.   See correspondence below and my complaint to BEIS has been copied to you today.”