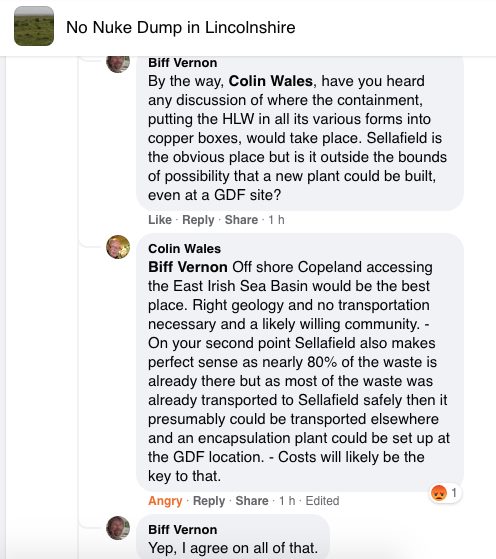 image; screenshot from Lincolnshire Against Nuke Dump – set up a week ago by Biff Vernon

Our campaign, Lakes Against Nuclear Dump, are not opposed to the principle of a Geological Disposal Facility, we are opposed to the Governmental push for “Delivery” given that the technical and scientific expertise based on copper and steel containment with bentonite buffer cannot yet ensure containment in the long term beyond all reasonable doubt.

We are very concerned that those who claim to be protectors are promoting the government’s expedient push for Delivery of a Geological Disposal Facility (or more than one). This push has more to do with the justification of new nuclear build which requires a ‘plan’ for “final disposal” of nuclear wastes, than protection of the biosphere from the annihilation resulting from exposure to heat generating nuclear wastes. Anyone who knows anything about nuclear waste knows that there is no “away,” no “disposal.” The waste cannot be safely dispossessed it HAS TO BE CONTAINED and for now ( a long time into the future until the doubts about containment have been resolved) that means monitoring and remedying when necessary.

The government are justifying GDF and trying to shame this generation by saying “its the right thing to do,” this view is parroted by those in favour of the plan which is expected. What is unexpected is that those who claim to be protectors of the public in the fight against nuclear dumping are actually promoting the plan.

We were shocked to see that Cumbria Trust member Colin Wales has told the Lincolnshire Against Nuke Dump facebook group that: “Off shore Copeland accessing the East Irish Sea Basin would be the best place. Right geology and no transportation necessary and a likely willing community. .. Sellafield also makes perfect sense as nearly 80% of the waste was already transported to Sellafield safely then it presumably could be trasported elsewhere and an encapsulation plant could be set up at the GDF location. Costs will likely be key to that.”

To this astounding revelation comes the reply from the Lincolnshire facebook admin: “Yep, I agree on all that.” The Lincolnshire group admin is Biff Vernon – vehemently pro Geological Disposal …just not in Lincolnshire! We would suggest that Lincolnshire is not best served by Biff who has ‘had a friendly phone call from Radioactive Waste Management’ and is being lined up to be the ‘community spokesperson.’ Funnily enough we have never had a friendly phone call – though they have our number (and much more besides no doubt). Radioactive Waste Management are not looking for the ‘best geology’ they are looking for ‘good enough’ which Lincolnshire may well find itself to be. ‘Good enough’ geology would need much more of a technical fix but RWM would “Deliver” – that after all is their statutory duty – to deliver GDF. The Head of Site Selection for RWM is Steve Reece – formerly Head of Operations for the controversial coal mine plan in Cumbria (which sits slap bang in the middle of the Copeland ‘search area’ for GDF). The advisor to RWM is the Committee on Radioactive Waste Management – a key member of this committee is Mark Kirkbride, who is still CEO of the controversial coal mine plan in Cumbria – nothing dodgy about that at all ?

Our argument is that the available technical fixes are way off ensuring the biosphere is separated into eternity from heat generating nuclear wastes. Biff Vernon of Lincolnshire Against Nuke Dump and Colin Wales of Cumbria Trust are doing the government’s job for them by effectively offering up Lincolnshire and Cumbria as GDF sites with ‘good enough’ geology and RWM selected community spokespeople who will say a fizzingly enthusiastic YES.

One thought on “Beware False ‘Protectors’”