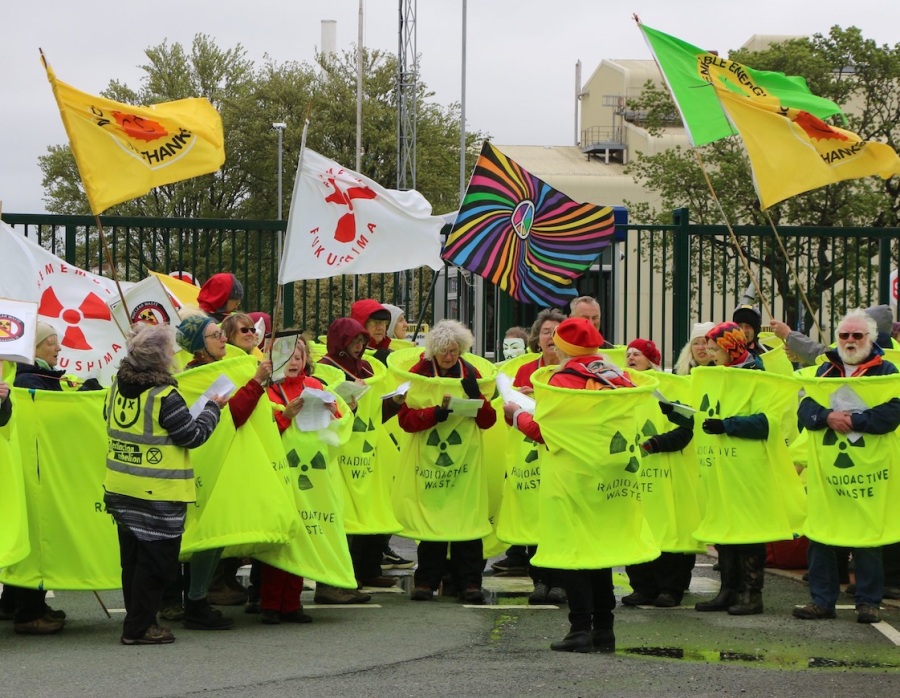 I know we are somewhat at odds over the nuclear issue but I wanted to write and let you know about the abuse, even from the Church of England, that those opposing nuclear have to contend with.

This time last year I took part in an event to mark the Chernobyl anniversary outside the UKs Nuclear Fuel manufacturing plant near Preston.  The event saw what could be the biggest turn out of folk dressed in nuclear waste barrel costumes that has ever happened in the UK, certainly the first of its kind outside the Springfields nuclear fuel plant.  It was a record breaking day as well as an event to mark the continuing impact of the terrible Chernobyl disaster.

I am an artist and was asked if I would put up an already well recieved art exhibition on the impacts of uranium mining in the nearby Church Hall – this would also mean that people travelling from many miles away to the event could use the hall as a comfort break as well as seeing the exhibition.  The hall was also to be the venue for a live link up with indigenous people around the world impacted upon by uranium mining.

However on saturday 27th April 2019 the Vicar of the Parish of Lund ordered me to take down the exhibition and vacate the (paid for from 1pm to 9pm) Church Hall saying aggresively “do this within the hour or I will call the police.” ( I now regret not waiting for the police who I suspect may have been more reasonable).

I was not the only one to be shocked by this – the vicar also refused entry to the church hall to elderly people who have worked for peace all their lives. People who had travelled for miles especially for the event.  Even though I tried to negotiate that I would take down the exhibition if he would only still allow people to use the facilities – he refused  even though we had paid for use of the church hall,

The event outside Springfields went ahead peacefully , there was NO police presence despite approximately 60 people being there outside the UKs nuclear fuel manufacturing plant peacefully marking the anniversary of Chernobyl.

Myself and others wrote to the Bishop of Blackburn as the head of the Diocese about our awful experience but we recieved no reply.

There was very little press coverage of the event.

More nuclear waste from uranium fuel made in Springfields arrived at Sellafield yesterday.
Who will provide a dissenting voice when dissenting voices are told to ‘get lost’ and then ignored even by the Church of England?