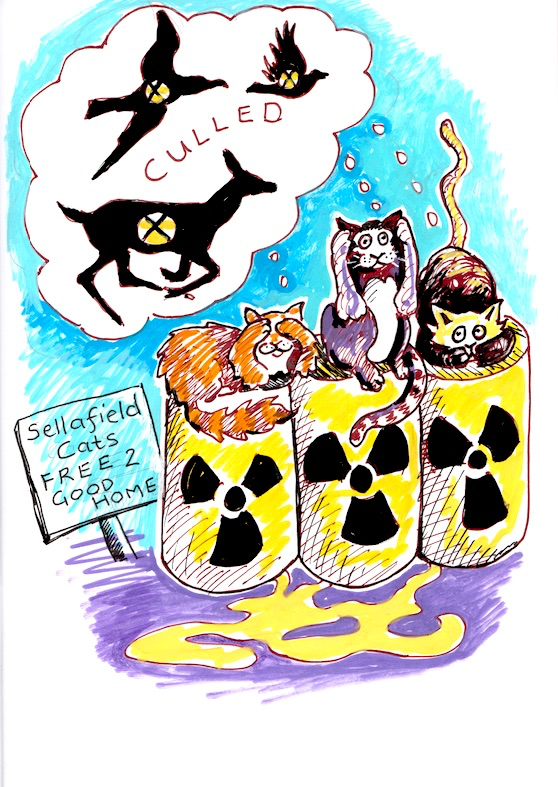 The following letter was sent to press last week – as far as I know still unpublished (if you see it anywhere give us a shout!)

Cats on a Hot Tin Roof.

Sellafield have had a busy 2019 offloading numerous operations from the world’s riskiest nuclear waste site and into the public realm. We were shocked that Allerdale Borough Council gave retrospective planning permission for a new offsite Nuclear Laundry (operating illegally for a year at Workington). Putting this laundry in the public domain is a pretence that Sellafield is equivalent to any other factory. It isn’t – it is the world’s riskiest and “hottest” nuclear waste site. Also reinforcing this pretence that Sellafield is ‘just another factory’ is the ‘feel good’ story we have been witnessing in the local press about the Sellafield cats.

Radiation Free Lakeland members are big cat lovers but this story has made our toes curl. Does Sellafield think that our memories are so short that we will not remember a. the cull a few years ago of the family of deer trapped in Sellafield’s new fences? b. all the birds and wildlife culled on the Sellafield site in order to (try to) contain radioactive contamination? c. the caring bird ladies of Seascale who had their garden taken away as nuclear waste and concreted over ?

We have asked Sellafield the following questions..

“Why weren’t the cats rehomed exclusively ‘in-house’ with Sellafield staff? (this would have allowed some control of rehoming ie not with young families and allowed ongoing monitoring of the cat and host’s health)

What methods were used to ensure the cats sent out to animal charities were ‘safe’ from radioactive contamination? (Alpha emitters cannot be detected even from a small distance.)

How many cats were culled on the Sellafield site in 2019 because they were found to be too radioactive to rehome’. What has happened to the bodies of these cats?

How many cats in total have been sent out to local animal organisations/charities to rehome?

What measures have Sellafield put in place to make sure that this scenario of Sellafield cats being put out for rehoming by members of the public, including young families, never happens again? The fact that staff had continued to feed the cats (a stated reason by Sellafield for the explosion in cats) after being told not to, indicates a humanity but also a lack of discipline in an industry that does not allow in any way for human error.”