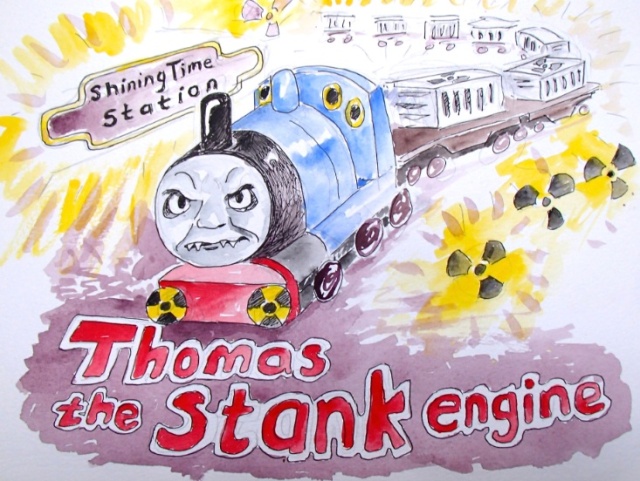 This Saturday 10.30 till the afternoon – Join us in opposing the continued radioactive cargo on our railways. –

We will be outside the Kingmoor depot, Carlisle on Saturday 20th July  handing out leaflets and showing our opposition to this deadly cargo which is given a thick, choking veneer of respectability with this DRS Charity Open Day

Created in 1994 by British Nuclear Fuels Ltd (now the Nuclear Decommissioning Authority) to take over British Rail’s handling of nuclear material.   DRS has since diversified into other freight operations including food.  This diversification serves to take the focus away from the main purpose which is the transport of nuclear materials (the only publicly owned railway we are allowed to have is that bearing nuclear freight!)

Another shrewd display of  sleight of hand to shroud this diabolic industry is this event which is billed as a “Charity Open Day….Bring the family along for a fun day out as we invite you to have a look behind the scenes.

NOT SO BRIEF ENCOUNTER – NUCLEAR TRAINS

Trains pulling containers of highly-radioactive nuclear fuel rods (“Nuclear Trains”) are operated by DRS, [Direct Rail Services owned by the Nuclear Decommissioning Authority) which transports this highly radioactive waste through some of most highly populated area in the UK.

Instead of being contained on the original nuclear sites of production the waste is taken to Sellafield where it was, until this year reprocessed. Reprocessing is intended to harvest the plutonium and uranium from spent fuel. But it increases the waste volume many times over with 8 million litres of radioactive waste discharged into the Irish Sea every day. Only a tiny fraction of plutonium and uranium has ever been used.

Nuclear trains are the most dangerous cargoes carried on our railways.

The flasks (even when empty) continually leak low-level radiation, and any increase in radiation levels in the environment means an increase in risk of radiation-linked diseases such as thyroid cancer and leukaemia. Women, young children and babies are most at risk.

As a result of a serious accident or terrorist attack the flasks could break open, releasing highly-radioactive material that would blow for miles in the wind.

HOW YOU CAN HELP?

Let others know about these waste trains.

Join us in our campaign to stop DRS transporting Nuclear Waste

For more information about the trains see the