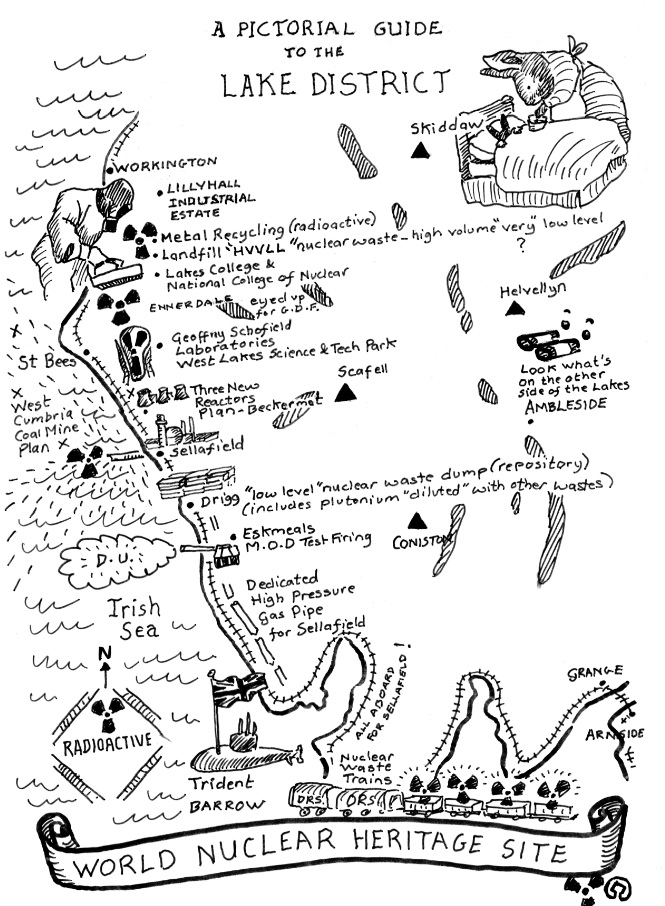 Bunting is being put up to welcome His Royal Highness, The Prince of Wales, who has been confirmed as the guest of honour at a special community event to mark the Lake District as a World Heritage Site on 26 March.

Members of RaFL plan to attend the event at Crow Park in Keswick to hand out our map specially produced for the occasion.  See you there!

A Pictorial Guide to the World Nuclear Heritage Site

Nuclear Waste Trains carry spent fuel from all the UKs nuclear reactors to Sellafield. The late Bob Crow, leader of the Railway Maritime and Transport Workers Union was opposed to the deadly cargo

There is a dedicated high-pressure gas pipe to Sellafield which runs along the coast bypassing towns and villages who have no gas.

The Ministry of Defence has a test firing range at Eskmeals “The use of the shells at the ranges since 1990 had been monitored by the Health and Safety Executive (HSE), which had found no evidence of risk to troops, civilians or wildlife” So says the MOD.

The UKs Low Level Nuclear Waste Repository consists of shipping containers stacked up in open concrete vaults at the village of Drigg. The site is above a regional aquifer. It is likely to be destroyed by coastal erosion. Much of the waste is long-lived and high risk.

Sellafield was a farming hamlet, which was taken over as a Royal Ordnance Factory and then an atomic bomb factory. Electricity was a by-product of making plutonium. There has been no electricity produced at Sellafield since 2003. ‘Reprocessing’ spent fuel retrieves plutonium. It increases the volume and danger of the nuclear wastes much of which is discharged to the Irish Sea. The high level wastes on site require cooling 24/7 to prevent catastrophe.

Three new reactors are planned on the greenfields and floodplain of the river Ehen. The reactors would be 700 metres from the primary school at Beckermet. The site is being called “Moorside” and the developers are Toshiba Westinghouse under the name NuGen.   The river Ehen already provides Sellafield with freshwater for cooling and processes along with freshwater from Wastwater. There is not enough freshwater in the world to cool the heels of the nuclear industry.

Geoffrey Schofield was BNFL’s (now Sellafield Ltd) doctor who was The “driving force” behind the post-mortem extraction of organs of Sellafield workers and the public. An inquiry into the body parts snatching scandal found he was subject to “little if any managerial supervision or control of his activities” prior to his death in 1985. Despite the trauma to families of the bereaved, a research laboratory at West Lakes Science Park has been named after Geoffrey Schofield.

Ennerdale has been under scrutiny as a location for the UKs Geological Disposal Facility for Nuclear Wastes. The wastes would percolate to the surface polluting groundwaters and much more besides.

At Lillyhall Industrial Estate there is increasing nuclearisation of a previously nuclear free area, Lakes College and the National College of Nuclear are grooming young minds, promoting new nuclear build and the dispersal of radioactive wastes to the environment through “decommissioning.” Far better for bright sparks to be focussing on how to safely divest from nuclear power and contain existing wastes

.Lillyhall Landfill The law was changed in 2007 allowing the nuclear industry to dump renamed “exempt” nuclear waste into landfill.  The plan: “the controlled release of radioactivity to groundwaters.” Dumping large volumes of radioactive waste in landfill should be banned as it was prior to 2007. ‘Accidents’ have happened with bags of low and intermediate level wastes being dumped here.

Radioactive Metal Recycling. The plan to bring a radioactive scrap metal yard to Workington was strongly opposed by locals.   It was given the go ahead by the regulators in 2008.  The plant is owned by EDF (Cyclife) who bought out Studsvik. The industry, as ever marks its own homework on this. There are no outside checks and the metal goes onto the open market. Whats hot and whats not?