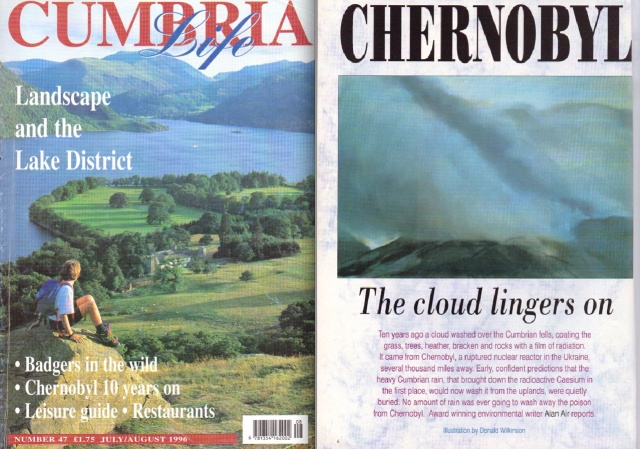 The lifestyle magazine, Cumbria Life, is not where you would expect to find a hard- hitting article on Chernobyl and the nuclear industry. But that is exactly what was published in this Cumbrian coffee table magazine in 1996. ….

The cloud lingers on

Ten years ago a cloud washed over the Cumbrian fells, coating the grass, trees, heather, bracken and rocks with a film of radiation. It came from Chernobyl, a ruptured nuclear reactor in the Ukraine, several thousand miles away. Early, confident predictions that the heavy Cumbrian rain, that brought down the radioactive Caesium in the first place would now wash it from the uplands, were quietly buried. No amount of rain was every going to wash away the poison from Chernobyl. Award winning environmental writer Alan Air reports.

At the height of the Cold War, the superpowers hid behind the perverted logic of the military defence acronym MAD – Mutually Assured Destruction – to shore up a global arms industry worth billions of pounds. We pointed our nuclear warheads at them. They pointed their nuclear warheads at us. Would they dare unleash their missiles? Would we dare unleash our missiles? All that awful tension.

Cumbria at first glance a global backwater of lakes, dry stone walls and back packing ramblers, seemed remote from the world stage but it played a part in the divide between West and East; Sellafield’s nuclear complex, the Broughton Moor arms depot, Anthorn’s submarine tracking station and even the Chapelcross nuclear plant just across the Solway Firth were all key components in the UK’s military and nuclear defence strategy.

Thankfully, Eastern Bloc missiles never did scream over Saddleback or the back o’ Skiddaw but in the spring of 1986, before the Soviet Union started to implode, Cumbrians felt the heat of Cold War politics on its back when an experiment at the Lenin nuclear plant at Chernobyl, in the Ukraine went wrong and Number 4 reactor exploded and threw up over Europe.

Spiralling weather patterns spread the atomic debris to dozens of countries in different time zones, heavy rain brought the radiation down on our county’s mountain tops and the alarms went berserk at Sellafield evoking a home-grown nuclear nightmare, the Windscale fire of ’57 that contaminated large parts of Cumbria and northern England. Chernobyl was nothing if not ironic.

Ten years later and Chernobyl – the noun is now instantly synonymous with the world’s worst nuclear disaster – is now in the hands of a ‘democratic’ Ukraine, but the perilous state of the infamous Number 4 reactor continues to cause concern among the

international community. The cracking concrete sarcophagus, hastily erected around the molten core by nuclear workers a the stricken plant, many of whom later died from the radiation, is already crumbling and radioactive water is pouring from the site. Unless a new containment chamber is constructed, and much of the cash would have to come from a kitty topped up by the rich industrial nations of the West, then Chernobyl 2 – The Sequel, is not just a possibility but a probability, warns Janine Allis-Smith of the campaign group Cumbrians Opposed to a Radioactive Environment (CORE).

“Chernobyl proved that you can never, ever guard against human error, someone doing something stupid. Whatever nuclear experts say about the design of the Chernobyl reactor it was human error that triggered the explosion. It is bound to happen again,” she predicts.

In the weeks, months and years after Chernobyl, hundreds of Cumbrian hill farmers faced restrictions on the movement, and sale for meat, of radioactive-contaminated sheep. Initial Government estimates about the time it would take for dangerous radiation to leave the animals were constantly revised upwards as the main components of Chernobyl fallout, Caesium 137 and Caesium 134, persisted in dangerous amounts in the beasts’ tissues.

Early, confident predictions that the heavy Cumbrian rain that brought down the Caesium in the first place, would now wash it from the uplands were quietly buried.

It took scientists at the Merlewood Research Station at Grange over Sands in south Cumbria, to uncover some very down to earth truths about the persistence of cancer causing Caesium in the Cumbrian hills. The irony of the scientific explanation wasn’t lost on the county’s loose alliance of anti-nuclear and ‘green’ campaigners forever kicking up a stink about nuclear waste reprocessing at Sellafield.

It was all to do with recycling.

In the nutrient poor uplands of the Lake District, native grasses and heathers survive by carefully safeguarding what minerals are available. Elements – which in 1986 including Caesium – are taken up by the roots and then circulated to the succulent shoot tips during the growing season. However, they are not lost when the plant sheds its leaves in the Autumn. Instead they are sucked back into the woody, permanent tissues, to be stored for re-use in the Spring. By another quirk of nature, Caesium was readily absorbed by Cumbrian hill vegetation because of a lack of potassium in the upland soil.

Scientists discovered that plants in potassium deficient areas have a Caesium take up rate that is 12 times greater than those plants growing in potassium rich soil. Even more bizarrely, many of Cumbria’s hillside plants enjoy ‘symbiotic’ relationships with ‘mycorrhizal fungi’ – tiny plants that survive by assisting the host plant to take up minerals. In the case of Cumbrian heather, these fungi helped move Caesium from the roots to the shoot tips on which the sheep fed. Even the lack of clay in our upland soil, a material that binds Caesium and hinders root absorption meant that vegetation could easily access this radioactive ion.

No amount of rain was ever going to wash away the poison from Chernobyl.

Sheep feeding on hillside vegetation took in Caesium with every mouthful. For Ennerdale sheep farmer, John Hinde, who has a 1,500 strong flock at Low Moor End, the Chernobyl fallout meant nine stressful years of working within Government restrictions and monitoring. He has survived but recalls: “For a time it looked as if there wasn’t going to be any sheep left on the fells.”

Ten years on and only a dozen or so farms in Cumbria are regulated by movement restrictions compared to nearly 400 in Wales. That would appear to be good news for our farmers, and the mutton-eating consumer. Janine Allis-Smith of CORE isn’t so sure that radiation levels on the fells have declined quite so dramatically as the Government would have us believe, and she suggests that the de-restrictions are rooted in political pragmatism.

“It is interesting that the only area where this massive de-restriction has taken place is the Lake District. It is obviously important that Cumbrian and the whole tourist area is seen to be okay. I think a lot of Cumbrian farmers had their eyes opened when it was discovered that only 50% of the radiation on the hills came from Chernobyl. Some of the stuff was there long before May 1986” she says.

Indeed, scientists confirmed that radioactive contamination of the fells was not confined to Chernobyl but that much of it came from global nuclear bomb testing, the Windscale Fire of 1957 and routine discharges from Windscale, now Sellafield, in the 1960s and 1970s. Allis-Smith cites an aerial survey revealed the Ravenglass Estuary was contaminated by radioactive discharges from Sellafield long before Chernobyl dumped on us.

“If radiation was like confetti, the whole bloody Lake District would be like a wedding cake.” She suggests. 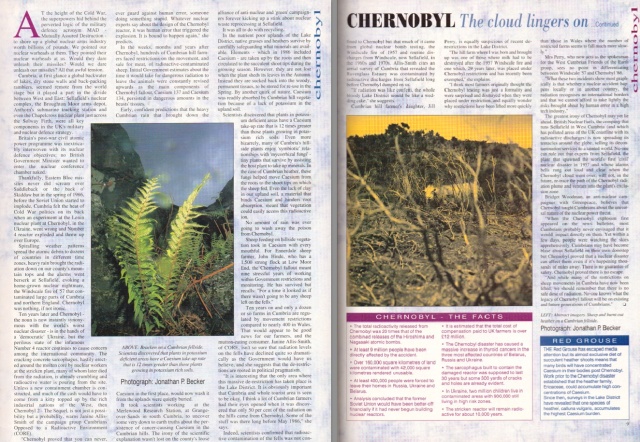 “The hill farm where I was born and brought up was one of those where milk had to be destroyed after the 1957 Windscale fire and one which, 29 years later, was placed under Chernobyl restrictions and has recently been exempted>” she explains.

“I think most farmers originally thought the Chernobyl testing was just a formality and were surprised and dismayed when they were placed under restriction, and equally wonder why restrictions have been lifted more quickly than those in Wales, where the number of restricted farms seems to fall much more slowly.”

Mrs Perry who now acts as the spokesman for West Cumbrian Friends of the Earth group, sees no point in differentiating between Windscale ’57 and Chernobyl ’86.

“What these two incidents show most graphically is that whether a nuclear accident happens locally or in another country, the radiation recognises no international borders and that we cannot afford to take lightly the risks brought about by human error in a high tech industry.”

The greatest irony of Chernobyl may yet lie ahead. British Nuclear Fuels, the company that now runs Sellafield in West Cumbria (and which has polluted areas of the UK coastline with its radioactive discharges) is now spreading tentacles around the globe. Selling its decontamination services to a tainted world. No-one can rule out experts from Sellafield, the plant that spawned the world’s first ‘civil’ nuclear disaster in 1957 and whose alarms bells rung out loud and clear when the Chernobyl could went over, will not, in the future, ret-trace the path of the Chernobyl radiation plume and venture into the plant’s exclusion zone.

Bridget Woodman, an anti nuclear campaigner with Greenpeace believes that Chernobyl taught Cumbrians about the universal nature of the nuclear power threat.

“When the Chernobyl explosion first appeared on the news bulletins, most Cumbrians probably never envisaged that it would impact directly on them. Yet within a few days, people were watching the skies apprehensively. Cumbrians may have become blasé about Sellafield on their own doorstep but Chernobyl proved that a nuclear disaster can affect them even if its happening thousands of miles away. There is no guarantee of safety. Chernobyl proved there is no escape.

“And while many of the restrictions on sheep movements in Cumbria have now been lifted, we should remember that there is no safe dose of radiation. No-one knows what the legacy of Chernobyl fallout will be on existing and future generations of Cumbrians.

RED GROUSE
The Red Grouse has escaped media attention but its almost exclusive diet of succulent heather shoots means that many birds will have concentrated Caesium in their bodies post Chernobyl. Work prior to the Chernobyl disaster established that the heather family, Ericaceae, could accumulate high concentrations of Caesium. Since then, surveys in the Lake District have revealed that one species of heather, calluna vulgaris, accumulates the highest Caesium burden.

Note: The author ” award winning environment writer” Alan Air has, since this excellent article 20 years ago, been recruited by the nuclear industry to write puff pieces and advertorials.  http://alanair.co.uk/images/studsvikadvertorial.pdf

14 thoughts on “Cumbria Life – “Chernobyl The Cloud Lingers On””