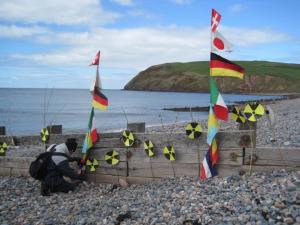 On the 8th of August from 11am to 3pm Radiation Free Lakeland will be holding a protest at St Bees.

*Protective clothing, gloves etc used by us on the day will be taken to Sellafield as potential Radioactive Waste.

People should come along at their own risk.

We will have some plastic gloves and masks for protection against contact and inhalation of radioactive particles. Children are most vulnerable to radiation and Public Health England cannot guarantee that children playing on the beach will not inhale or ingest alpha radioactive particles  from Sellafield reprocessing plant.

Our protest has been sparked by Cumbria Wildlife Trust’s continued indifference (despite our conversations with them) to the potential harm their Beached Art event could do to health by encouraging young children to dig for hours in the sand at St Bees.

Your sand sculpture should be made only from sand and other natural materials found on the beach and be inspired by Irish Sea wildlife. Good luck!

Good Luck indeed! Materials not mentioned are the radioactive particles washed ashore with every tide. There is a programme of monitoring and retrieval by the nuclear industry but this is on hold over the summer to maintain public confidence in the nuclear industry’s policy of dispersal of radioactive wastes to the environment.  These wastes do disperse, with plutonium from Sellafield even travelling as far north as the Arctic but much of it comes back to Cumbrian beaches with the tide.  Especially where there is a natural barrier to dispersal such as St Bees Head.

Jo Brown of Parents Concerned About Hinkley has said: “UK seaside local authorities have become aware that in 2015 the EU Bathing Water Directive will impose strict new standards on sea quality. What they appear not to have understood is that under the 2012 Health and Social Care Act, part of the Secretary of State’s duty will be to protect the public from ionising or non-ionising radiation. This means that all UK coastal resorts within the fallout zone of nuclear sites will have to display notices warning tourists and residents that the water is not safe to bathe in”.

Cumbrians Opposed to a Radioactive Environment have consistently called for warning signs to be placed on Cumbrian beaches. A review making a strong case for the use of signs on West Cumbrian beaches to advise the public on the presence of radioactive particles, has been sent to the Health Protection Agency (HPA now Public Health England), the Environment Agency, the Government’s Committee on the Medical Aspects of Radiation in the Environment (COMARE) and other bodies involved in Sellafield Ltd’s beach monitoring programme Full press release here. http://www.corecumbria.co.uk/newsapp/pressreleases/pressmain.asp?StrNewsID=320

Radiation Free Lakeland agree and have been urging groups such as Cumbria Wildlife Trust who encourage families to spend time on the beaches, to acknowledge concerns and at the very least make those concerns known to families attending their beach events. As well as placing the symbolic ‘radioactive’ pebbles, Radiation Free Lakeland will also be placing a sign on the beach which reiterates the government’s own advice