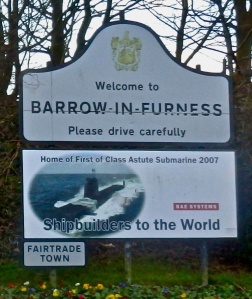 Today at Faslane in Scotland there is a blockade of the Trident base.

“On Monday, 13th April the Scrap Trident Bairns Not Bombs Blockade will stop work at Faslane where Trident nuclear weapons are based just 30 miles from Glasgow. We want to send a strong reminder that the people of Scotland fundamentally oppose the UK’s possession of nuclear weapons. Please consider either taking part directly or in a support role. For more details check out the Blockade Briefing at http://scraptrident.org/”

Trident is a multi faceted weapon that poisons us even without a single diabolic missile being launched. Most Barrovians are blissfully unaware that the towns shipyard routinely releases radiation to sea and air.  It is far from reassuring that nuclear sub building emissions are dwarfed by the emissions from Sellafield:

“The discharges from the Barrow nuclear site are minor compared with those from other nuclear sites located on the north-west coast of England. The coast and sea area in the vicinity of Barrow-in- Furness and south-west Cumbria may be affected by discharges of liquid radioactive waste from these sites, most notably Sellafield”.

Another reason for scrapping the building of Trident here in Barrow is the long forgotten fact that the village of Rampside (before Barrow existed) was the site of the UKs only liquefaction event: An earthquake in 1865 in the northwest of England suggests that a sufficiently shallow small event can also produce liquefaction. The effects are well-documented in historical sources and include sand fountaining. Modern investigation is confined to documentary evidence owing to the tidal environment of the area where liquefaction occurred. Analysis shows that the felt area of the earthquake was probably only about 200 km2; however, heavy damage occurred in the village of Rampside and the maximum intensity is assessed at 8. ..such a high intensity is not usually produced by such small earthquakes.

6 thoughts on “From Barrow “Home of Trident” to Faslane: Bairns Not Bombs!”